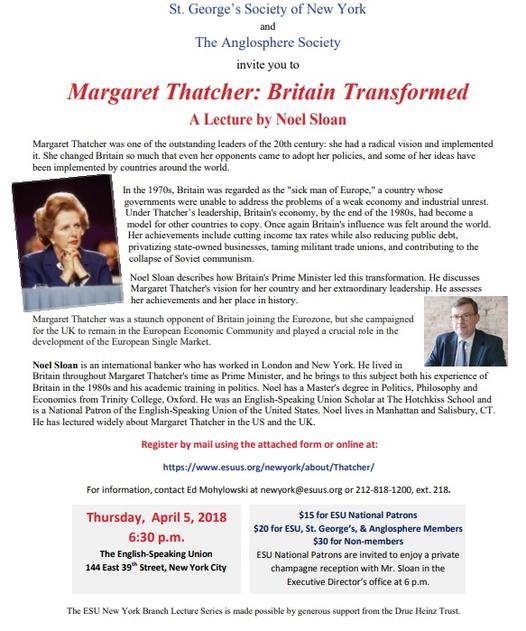 We have some major celebrations and events planned for Q1 of 2018, all of which will be available to our membership at a special rate.

January 23, 2018
Reception at 200 Eleventh Avenue for Board Members of the Saint George's Society and TAS with the goal of exploring ways in which we can build on our collaborative relationship.

March Series on National Security in the Trump Era
We are looking forward to announcing a major collaboration with one of the most respected D.C.-based organizations on the front lines of military thinking. This relationship will access for us the insights into emerging threats as well as to provide the analysis of our nation's ability to execute military operations in an increasingly perilous world.

The Coalition to Stop Christian Genocide
Following the spectacular success of our December 5 Conference on Coming Home from Genocide - attended by over 200 registrants - we are now poised to form a Christian/Jewish coalition led by His Eminence Cardinal Dolan together with Ambassador Ronald Lauder to build national awareness of this Christian genocide and what can be done to exert pressure on the global community to ensure the safety of this population.

In mid­-February, TAS members and friends will be invited to a Downton Abbey soiree, an elegant evening of Edwardian inspired food and drink while exploring Downton Abbey, the Exhibition. Lee Cohen, our New York Director, will be in touch with the details of this occasion.

2018 marks the centennial anniversary of the end of the First World War and we will host an evening with a leading historian.
The Special Relationship in 2018: Q2 and Beyond
2018 promises to be a very important one for the Special Relationship between the United States and the United Kingdom symbolized by the wedding between HRH Prince Harry and Meghan Markle, a union that is a cause of great celebration in contrast to the Abdication Crisis of 1936, provoked by Prince Harry's great-uncle the Duke of Windsor announcement of his plans to marry Wallis Simpson.

We are inviting renowned Royal Biographer Penny Junor,
whose recent book on Camilla, Duchess of Cornwall will be published in the United States in March, to a book signing Reception, where she will also speak of her other royal biographies including the Prince of Wales, the Duke of Cambridge and Prince Harry.

The Royal Wedding: May 19th, 2018
We will be marking this occasion not only with a live broadcast of the wedding, as we did with Prince William and Catherine Middleton, but also with some programs that focus on the monarchy, its resilience and its role in the life of the English speaking peoples. We look forward to joining forces with other Anglo-American Fellowship organizations in their celebrations of this happy occasion.


Thank you again for your continued support of TAS and we look forward to seeing you at our various programs and events in 2018. 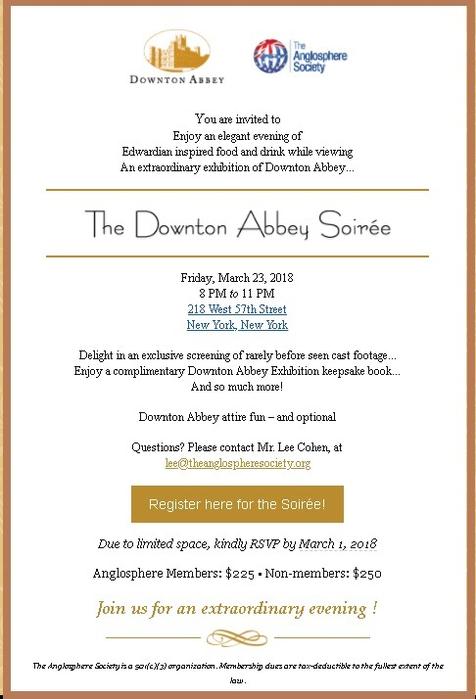 Mark Your Calendars for 2018 events !

In celebration of the Reign of Her Majesty Queen Elizabeth II And the wedding of
His Royal Highness Prince Henry of Wales
to Ms. Meghan Markle

​A Conversation at the Reception with
Barbara Taylor Bradford, OBE
Best Selling Novelist
Dr. Amanda Foreman
Renowned Biographer and Historian
Long to Reign Over Us
Reflections on an extraordinary reign
Moderated by Amanda Bowman
Founder, The Anglosphere Society
Wednesday, May 16, 2018
New York, New York
Registration and Cocktails 6:00 PM
Reflections on the reign of the Queen 6:45 PM
Loyal Toast and Toast to the Royal Couple 7:30 PM
Celebration continues 7:30 – 8:00 PM
Music by the Alex Donner Band


Reception Ticket - $125 per member | $150 per non-member
VIP Dinner - $750 (limited to 50 people)
Cocktail Attire
Net proceeds will go to Prince Harry’s charity Walking With the Wounded (WWTW)
and St. George's Society
To RSVP or for questions, please contact Rose Sullivan at rose@theanglospheresociety.org
or at 201-447-0847 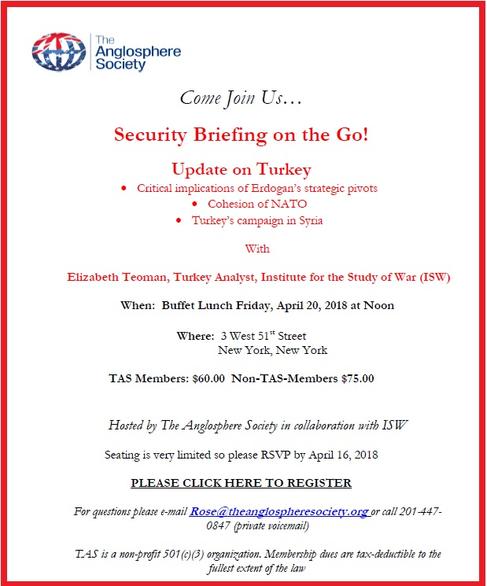 Please Join us May 16th

​
•
“In recognition of religious freedom as a foreign policy of the United States, and to advocate on behalf of the individuals viewed as persecuted in foreign countries on the account of religion”
Religious Persecution in the Middle East and Beyond


The Anglosphere Society is a 501(c)(3) organization. Membership dues are tax-deductible to the fullest extent of the law.